Today, the total cryptocurrency market is trading at $208 billion which is $11 billion or 5% less than where we were yesterday at $219 billion. Total trading volume has actually increased to $15.3 billion while Bitcoin’s market dominance is rising. These are actually bearish signs especially since trading volume has been increasing, adding more confirmation to the trend. 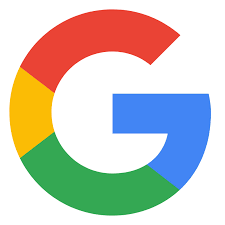 Yesterday, when I had written that even though there were some entry points for Bitcoin and Ethereum, that I would not enter because their prices were probably going to drop, and that’s exactly what happened. There have not really been any fundamentals to cause the price surges. The biggest news in the past 24 hours was definitely the announcement of Google ending their ban on cryptocurrency ads and allowing regulated cryptocurrency exchanges to buy ads in the US and Japan. The original rule was that all cryptocurrency ads were going to banned in an effort to protect consumer from the frothiness and bad actor culture of some initial coin offerings as well as gurus or wallets.

The fact that they’ve reinstating the ads is huge for cryptocurrencies because of how big Google is. However, I find it hard to believe that the reason why they’ve reinstated ads is because the space as become safer. Rather, I see two important outcomes from this and they are that Google has acknowledged the profitability of cryptocurrencies and that the future for cryptocurrencies remains bright. That being said, there are plenty of coins trying to attack the online advertisement industry by creating a more decentralized way to advertise products so that content creators reap the most benefits while trying to eliminate censorship like the cryptocurrency ad bans we’ve seen from Google, Facebook, and Snapchat. Initial coin offerings are technically still red hot, raising $1.4 billion in September so far and the month isn’t even over. It is going to be interesting to see if major companies that do have bans or restrictions may lighten up on the regulation, giving the large amounts of profits that these companies could be missing out on. 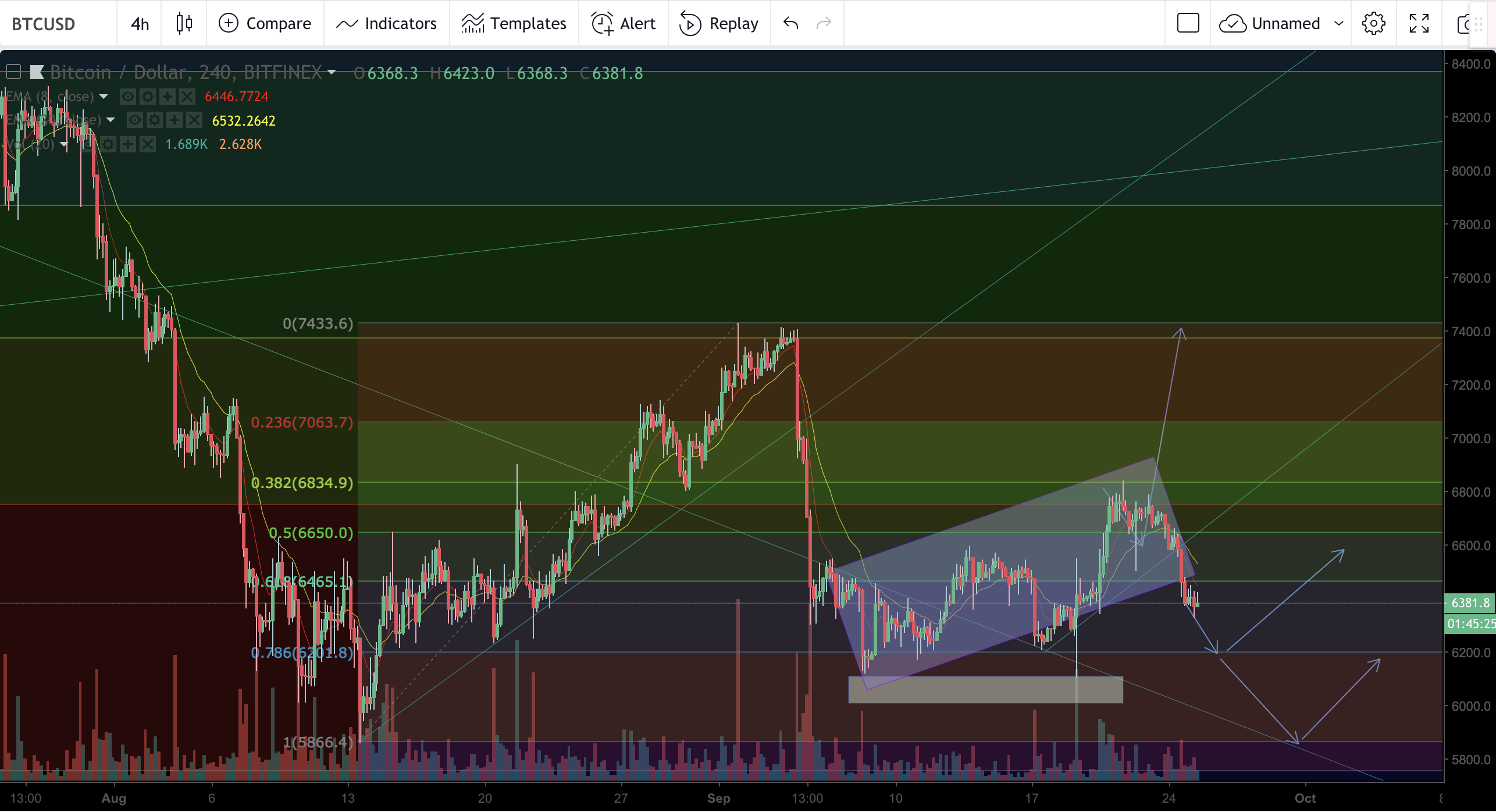 Bitcoin is currently trading at $6396 which isn’t all that surprising considering that hasn’t been impactful news lately. It has just broken downwards from a bear flag pattern that began on September 5th as indicated with the slanted rectangle so price movement downwards seems likely at this point. It has also broken below the 61.8% Fibonacci level and is now possibly forming a bearish pennant as well. MACD has crossed downwards but stochastic is exhibiting a trend reversal going up, at least on the four charts as its oversold. I do expect the price to retest $6200 at least before we can bounce back up, since we have tested this level about 5 times since September 8th. The amount of short positions is still insignificantly larger than the amount of long positions so a short squeeze is still out of probability for the time being. It would not be wise to not buy today as I’ve been saying for the past few days now. 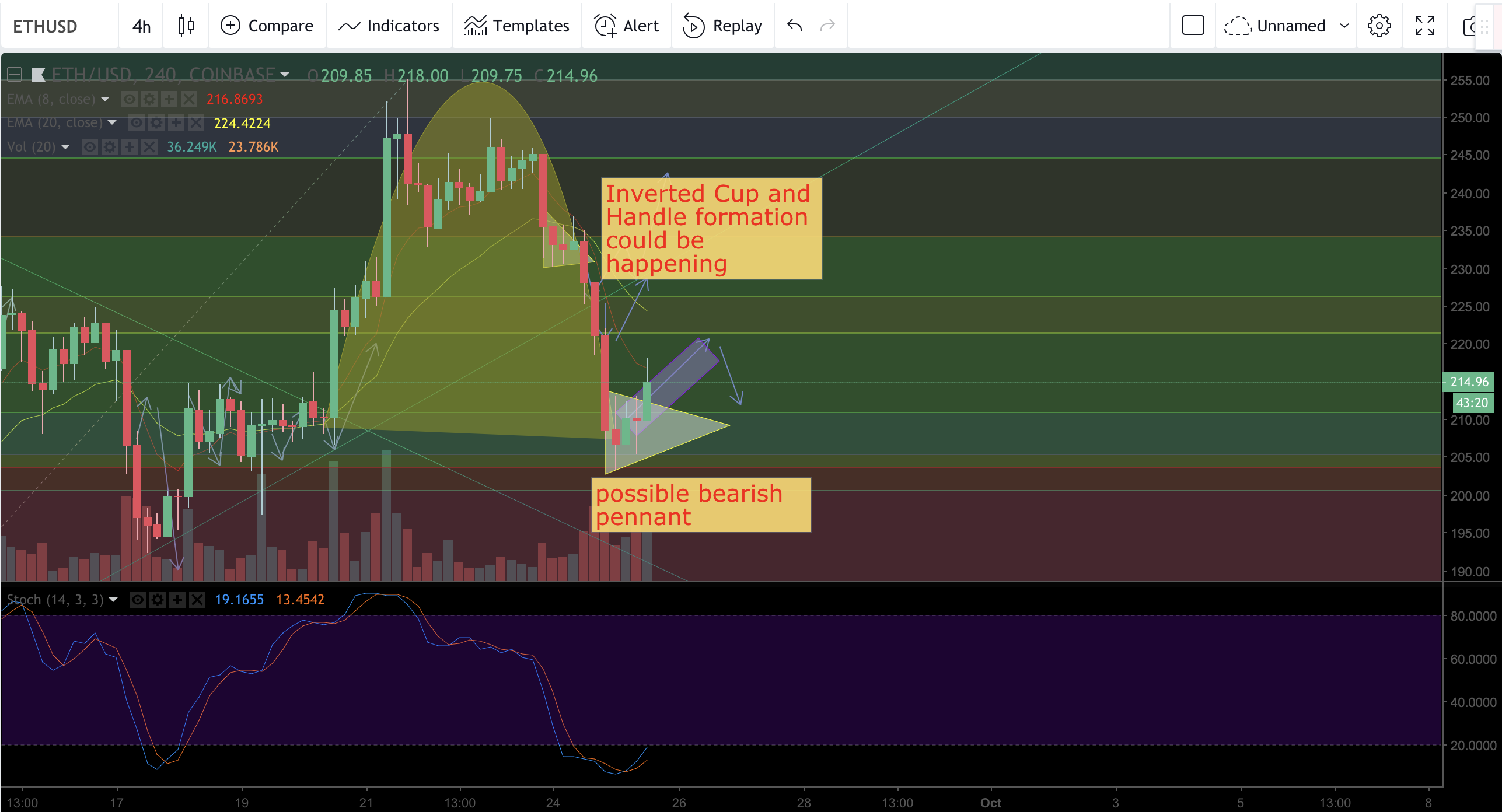 Ethereum is currently trading at $215 with a strong possibility that the price is going to move downwards still. The good news is that it has broken out of a bearish pennant but the bad news is that the trend is exhibiting an inverse cup and handle formation. Because it’s an inverse cup and handle formation, the price should be rising to about $221 before dropping back down. It has successfully tested $200 as a support earlier today which honestly should have been expected, given that $200 is a psychological barrier/support level. I am still recommending to stay out of Ethereum until further notice as an entry point here is still extremely risky considering that the market is still technically bearish. The next entry point I’m looking towards is around $185 because that will be a break near the 78.6% Fibonacci level and the intersection of trying to break into a downtrend.

The best course of action right now is to wait for the next entry point (if you trying to invest for a medium to long-term on BTC/ETH or any other altcoins because unless there’s news, the market is still technically bearish, something that I’ve been saying since last week, regardless of the rising prices.