[Preston Coin Headlines] The market continues to pick up. Also, do not sleep on NEO just yet.

Today, the total cryptocurrency market cap is trading at $224 billion which is about $8 billion more than yesterday’s market cap with a total trading volume at an increase of $1billion at $16 billion for the last 24 hours. Bitcoin’s market dominance has gone down by about half a percent to 51.7% so this is good. It seems that many altcoins have found bottom and we are trying to make a push forward which is something that has been quite rare these past few months in cryptocurrency.

One of the biggest news that I read about for today was that the Austrian government would be notarizing $1.3 billion worth of bonds through the Ethereum blockchain. I think that this is huge considering the possibilities of issuing municipal bonds with blockchain technology. By making the transaction process more transparent with blockchain technology as well as increase efficiency and authenticity, this only highlights growing use cases. Even here in California, the city of Berkeley had already announced earlier this year that the city would be trying to issue city municipal bonds with crypto as well. Ethereum’s price did not react to this but I do think this story is very important in the case for widespread adoption.

Bitcoin is currently trading at about $6700 after I had said earlier a possible entry point was $6500. Bitcoin has been trying to find support at $6500 for a while now and we’ve broken up about 4% today. The 8-period EMA has finally crossed over the 20-period EMA on the 4HR charts and a stop loss at $6250 does not seem like a bad idea. However, it could be wise to take profits right now as momentum could be waning. If we can surpass $6830 then a bullish trend reversal is in place but until then, I am still skeptical. The good news is that RSI is bullish because it’s above 50 RSI and that MACD has turned upwards. I do not see a run past $6900 at best but the price here at $6700 can still be longed. The amount of short positions has risen proportionally to the number of longs so it’s not that easy to call a short or a long squeeze coming. However, the increase in the amount of short and long positions corroborates with the amount of trading volume that is increasing for all of cryptocurrencies which is a good indication of market movement/liquidity.

About two days ago, I had said that the price of Ethereum if entered at the resistance level of $221 that the price would shoot up to about $233 and face rejection and at the time of writing, that’s exactly is what has happened. The stop loss was $209 and it did not hit this stop so by now, that would have been a nice 5% profit. That's because if Ethereum closed above $221, that would have invalidated the inverted cup and handle formation, and it did. Currently though, I am still not convinced of the price movement up although a bull run is still imminent. The trend is not above the upward trend line yet so Ether is technically still bearish but overall, the trend has been moving up ever since the price hit $166 not too long ago. I would like to see Ethereum surpass $244 by the end of the week to give a pretty good signal that the trend is finally moving upwards. The good news is that we have finally closed 1 candle above the 38.2% Fibonacci level and that MACD’s momentum shows the movement is upwards. 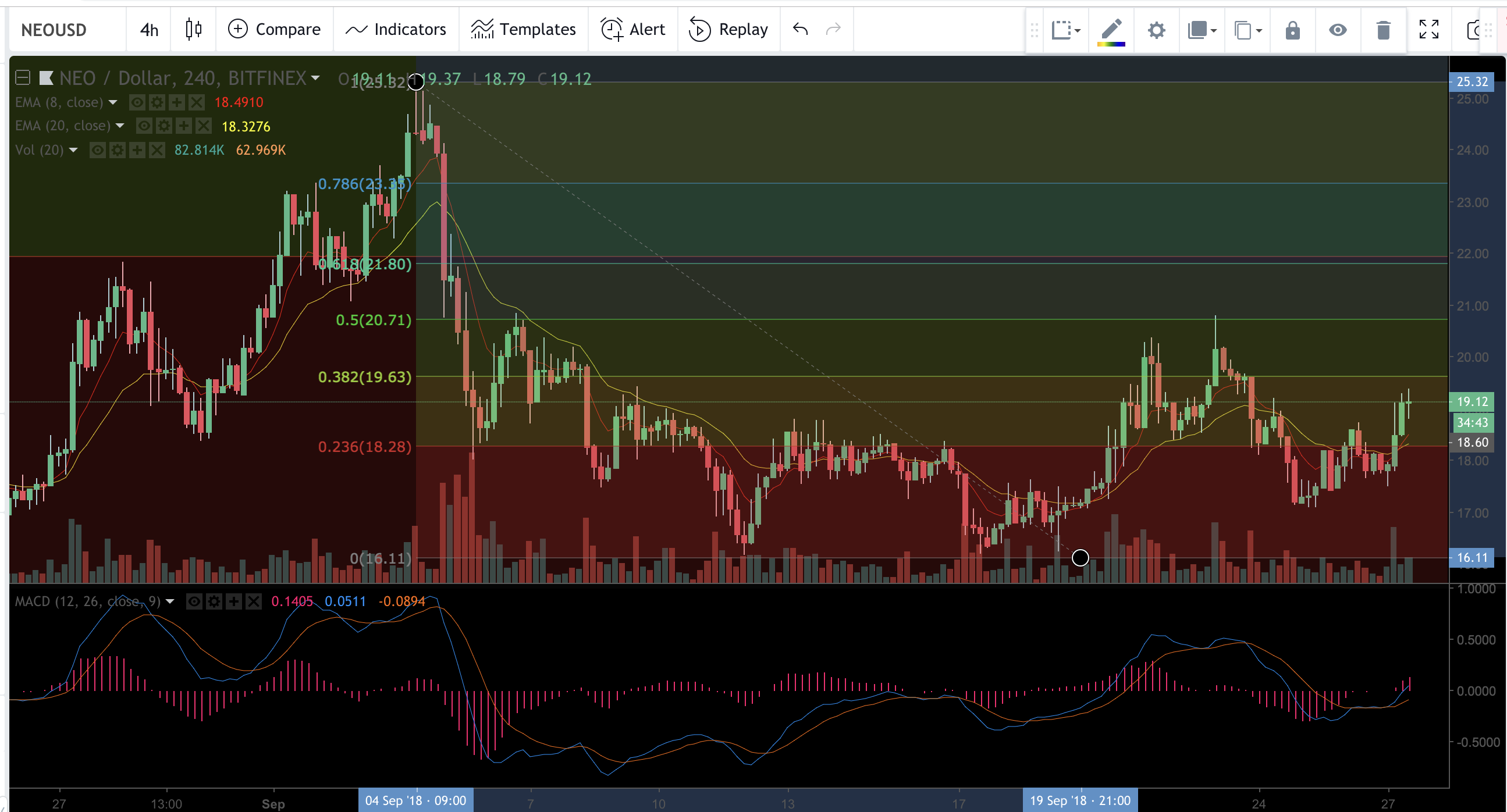 One coin that people have not been talking about much lately but I do think is going to start moving up in the very near future is NEO. This coin is still top 15 in total cryptocurrencies by market cap and it appears that all the major cryptocurrencies are taking their turns in having price surges recently. Neo was once $200 and has dropped about 90% from its peak. Many analysts agree that a price reversal is imminent and would happen sooner rather than later. It appears that a bottom has been found at $13.60 and I do expect the price to rebound to about $26 at least. People may forget that there’s still $120 million in total trading volume at the time of this writing so do not count this major coin out. When the move happens, it will be swift and violent. Perfect entry points are between $15.00-$17.00 with an absolute stop loss at $13.00. Short to mid-term it is a somewhat risky play but the rewards we are looking at are at least 40-45%. This trade should materialize by late October latest.