Today the total cryptocurrency market is trading at $220 billion which is about $2-$4 billion less than yesterday. Total trading volume is declining back down to the low $16 billions and Bitcoin’s market dominance is staying relatively stagnant once again at 52%. The positive is that trading volume is relatively high so the market is moving with some more conviction compared to previously where the price action was more suspicious because there wasn’t enough trading volume when we were trading between $10 billion to $13 billion.

There was a report by Diar research that says 70% of small-cap cryptocurrency tokens are now worth less than what their ICO raised. This isn’t that alarming considering how bearish the whole market has been. What should be noted is that since last December, every month except for July and August saw $1 billion raised per month in ICO funds. Even in bear markets, the ICO fundraising model is still popular and that’s what really should be the takeaway point. It’s funny that people still think cryptocurrencies are going to go away when we barely haven’t even started. We are still in an accumulation phase following a heavy distribution phase yet ICOs are still raising exorbitant amounts of money. This is a good indicator still for an impending bull run.

Coinbase announced yesterday that they would launching a few new products with one that has been gaining much negative traction and that is their “Coinbase bundle” which will be a basket of cryptocurrencies that new investors can buy into. Coinbase’s motive for doing this is to try to get more exposure to investors that may not know how but I personally don’t see the purpose or major adoption of this. If people log on Coinbase, it’s relatively easy to purchase cryptocurrencies regardless without having a pre-set amount of which basket contains what. Also, the example that they used in trying to promote their bundle was based on purchasing in September 2017 and not December 2017, January 2018 when crypto was its all-time highs. What they will be offering that is somewhat interesting is their new cryptocurrency tools for beginners which I think is actually the most beneficial new product out of the 4 new ones that are launching because trading can be confusing for someone new.

Tom Lee of Fundstrat has come out and said the expects $1900 Ethereum by end of 2019 but I am more skeptical about price predictions. He has also come out and said that Bitcoin should trade between $22,000 to $25,000 by end of year. It does seem cryptocurrencies have bottomed out with the whole market down 80% so a rebound is imminent. I do think that that $8,000-$10,000 by end of year is more likely but we will see. For Ethereum to basically go 800% from here would need significant momentum and as of right now, major developments of Ethereum’s blockchain has not come to fruition. He could be right but I think a very conservative view is $500 Ethereum. 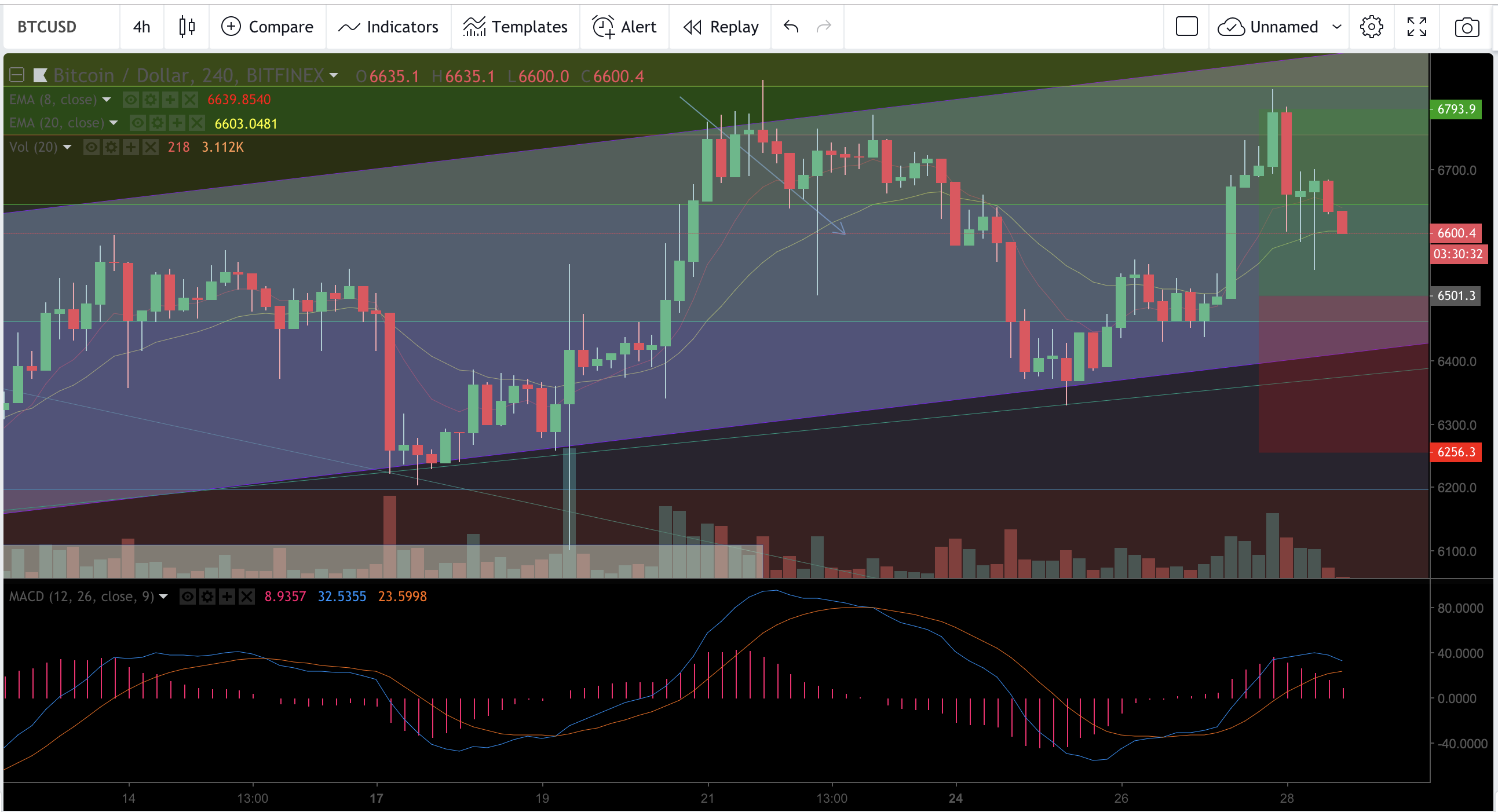 Bitcoin is currently trading at $6603 and this is a pretty critical level of support. If we break below $6600 after testing $6550 earlier today then I would be very worried. Because we have not closed below $6600, that is good news. However, a break below here is a break on this micro trend line and could probably send Bitcoin back down to the low $6,000 range. The 8-period EMA on the 4HR charts is about to cross below the 20-period EMA and MACD has started pointing downwards, so I am expecting a move down. Yesterday was a perfect entry point when I had said to enter at $6500 and to take profits at $6800 because a major level of resistance was $6830. The price would eventually reach $6800 and that would have been a nice 4.50% profit. Right now, the price seems to consolidating at best but moving down most likely. 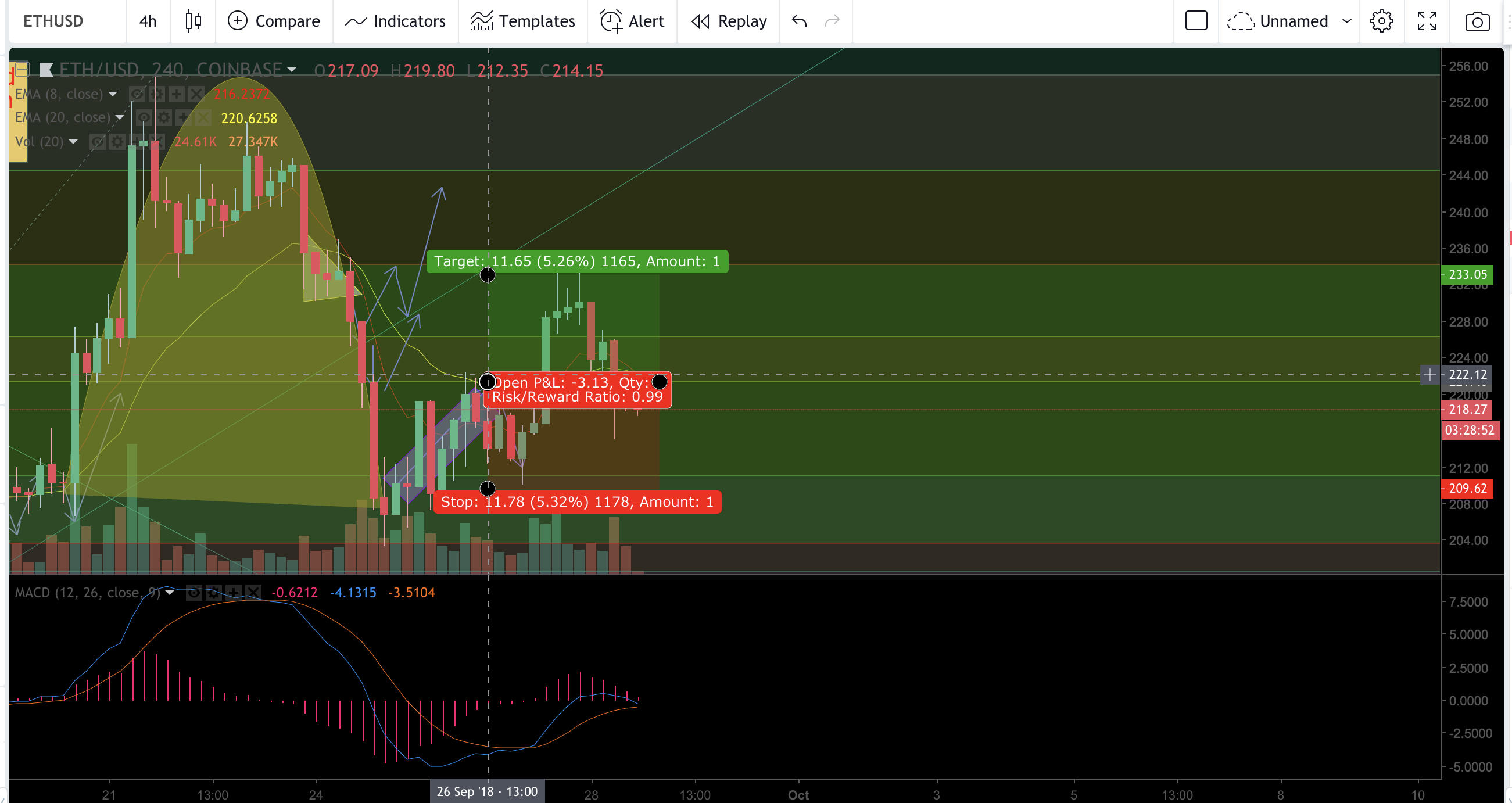 Ethereum is currently trading at $218 after facing an expected rejection at $233. I had said yesterday that the price would probably reach $233 and face rejection because that’s where an upward trend line was. The price has now broken down on an inner trend line that was started on September 25th so the price also seems to be moving down as well. MACD looks like it’s moving downwards and the histogram is about to turn positive so do expect more of this retracement within the coming days.